skip to main | skip to sidebar

At age 9, in what would become an annual ritual, Michael Martino tumbled out of bed at the crack of dawn, pedaled his bike across Irvine and spent the day watching planes at the El Toro Air Show.
"He always knew his mission in life was to be a pilot," said his mother, Sybil. 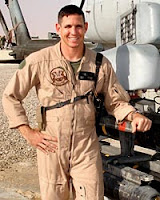 In high school, between stints on the football and wrestling teams, his hobby was assembling model aircraft. After graduating with an economics degree from UC San Diego in 1996, he enlisted in the Marine Corps and earned his wings.
When he was later dispatched to Iraq, he told his father, "If something happens, I don't want you and Mom to get mad at the military or the government. I'm doing what I love to do and what I believe in."
On Nov. 2, as Capt. Martino and his co-pilot flew a support mission near Ramadi, a shoulder-fired enemy rocket streaked into the sky, knocking their Super Cobra helicopter to the ground and killing both men, according to news reports. Al Qaeda insurgents claimed responsibility for the attack.
Martino, 32, was assigned to Marine Light-Attack Helicopter Squadron 369, Marine Aircraft Group 39, 3rd Marine Aircraft Wing, 1st Marine Expeditionary Force at Camp Pendleton. During Operation Iraqi Freedom, his unit was attached to the 2nd Marine Aircraft Wing, 2nd Marine Expeditionary Force (Forward).
Back home, friends and relatives recalled the Oceanside resident as a quiet, selfless man who was devoted to family, work and the Washington Redskins, his favorite football team.
In Iraq, fellow Marines nicknamed him "Oprah" because he was so good at listening to people's problems. It was a trait he developed in childhood.

"Whenever I had a nightmare, I'd go to Mike instead of our parents," said his older sister, Lauri. "He'd stay up and talk to me until I could go back to sleep."
He had a contagious smile and generous spirit, said Katie Ashford, whose husband, Brian, went through flight school with Martino and served in the same squadron. "I've never known anyone to love their friends unconditionally, but Mike did," she said.
Martino also had a playful side. In September, after learning that high school pal Scott Tarlo had to pay $130,000 in estate taxes after the death of a parent, Martino told him the sum would pay for one of the Hellfire missiles carried by his helicopter. A few weeks later, Tarlo received a photo of Martino next to a missile painted with Tarlo's name and the message, "USMC thanks you."

Born in 1973 on the Marshall Islands, where his parents worked as military contractors, Martino was the youngest of three children. When he was 8, the family moved to Irvine.

At Woodbridge High School he joined the football team and was nicknamed "Flea" for his small size and tenacious play.

After college, he signed up as a Marine and eventually was assigned to a light-attack helicopter squadron based at Camp Pendleton. 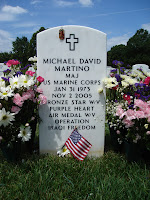 In 2004, during his first tour of duty in Iraq, he called in airstrikes on enemy positions in Fallouja, earning a Navy Commendation Medal and a nomination for a Bronze Star.
But Martino wasn't hardened by combat, his mother said. He risked his own safety to rescue civilians and consulted a chaplain about "the anguish he felt for killing people," she said. The chaplain told him he was a peacekeeper, as described in the Bible.
Martino's second tour of duty began a few weeks ago, this time as a helicopter pilot. Before he shipped out, his parents visited him at Camp Pendleton and had "a sinking feeling it would be the last time we saw him," his mother said.
Martino will be buried Tuesday at Arlington National Cemetery in Virginia. In addition to his parents and sister, he is survived by a brother, Robert; and two nieces. 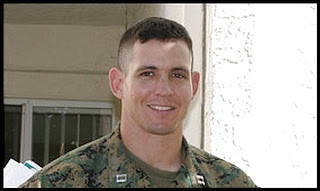 Contento On The Texican Frontera, North Side, '07

The Official Architect of Boom3

The Blessed 13 Plus 1: Leaders and Arbiters of Right Good Taste: Welcome Shudiil Moorgan.

Saint Thomas The Apostle of Hollywood

The Official West Coast House of Prayer for Boom3

News & Opinion 4 Peeps Who Know This Ain't The HuffPo PuffHo

It's Back But: Dont Look Here

Shouldn't You Be Working?

Chuck Norris was the fourth wise man, who gave baby Jesus the gift of beard, which he carried with him until he died. The other three wise men were enraged by the preference that Jesus showed to Chuck's gift, and arranged to have him written out of the bible. All three died soon after of mysterious roundhouse-kick related injuries.

In It Together: At last, something worth reading in the LA Times

Mr. Todd Palin doesn't kill two birds with one stone. He kills all birds with two stones. The two hanging low'n'loose there in his pants. 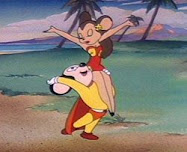 Yes we have a theme song. Go ahead and listen: Talking Heads

Whatever I Think Or Whatever You Think Or/And Whatever We Think They Think, Here's What They Say:

CONGREGATION FOR THE DOCTRINE OF THE FAITH:
LETTER TO THE BISHOPS OF THE CATHOLIC CHURCH ON THEPASTORAL CARE OF X PERSONS